This was just before 7pm, when all the church bells started ringing. Bats were flying against the sunset sky, and the evening glow reflected in the Danube bend. 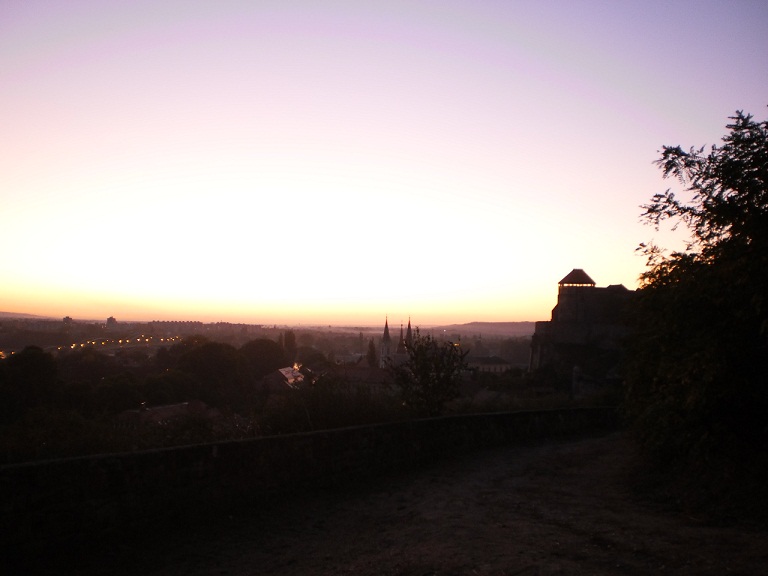 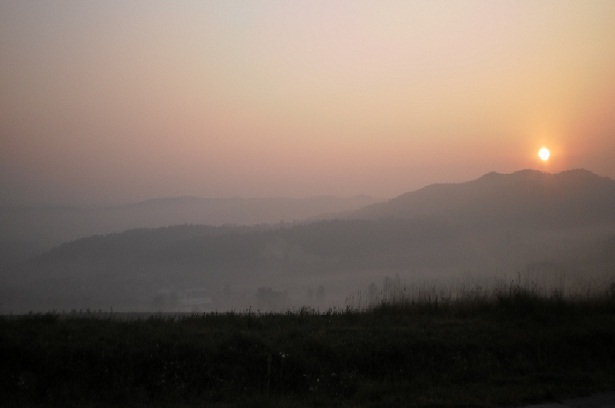 The neighbouring town of Solymár had its annual village party (the Solymár Búcsú) last weekend, with a street fair of local market stalls and several days of events. One of the highlights, for me anyway, was a chamber music recital by the local Pilis Kamara ensemble, with items by Bartok, Kodaly and other Hungarian composers, in the lovely outdoor auditorium of the culture house, under the autumn chesnut trees. 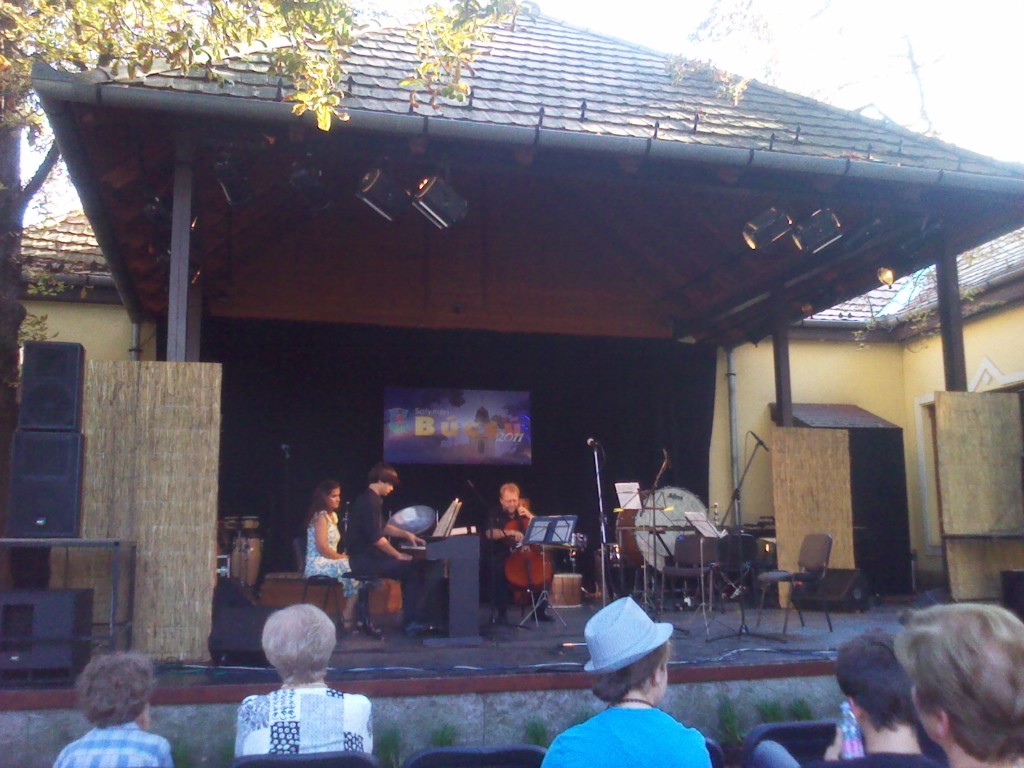 Solymár has the most amazing Baroque Catholic church in the main square, decorated inside with dramatic trompe l’oeil frescoes. You can see them all in the panorama below. What a find, in a village church! 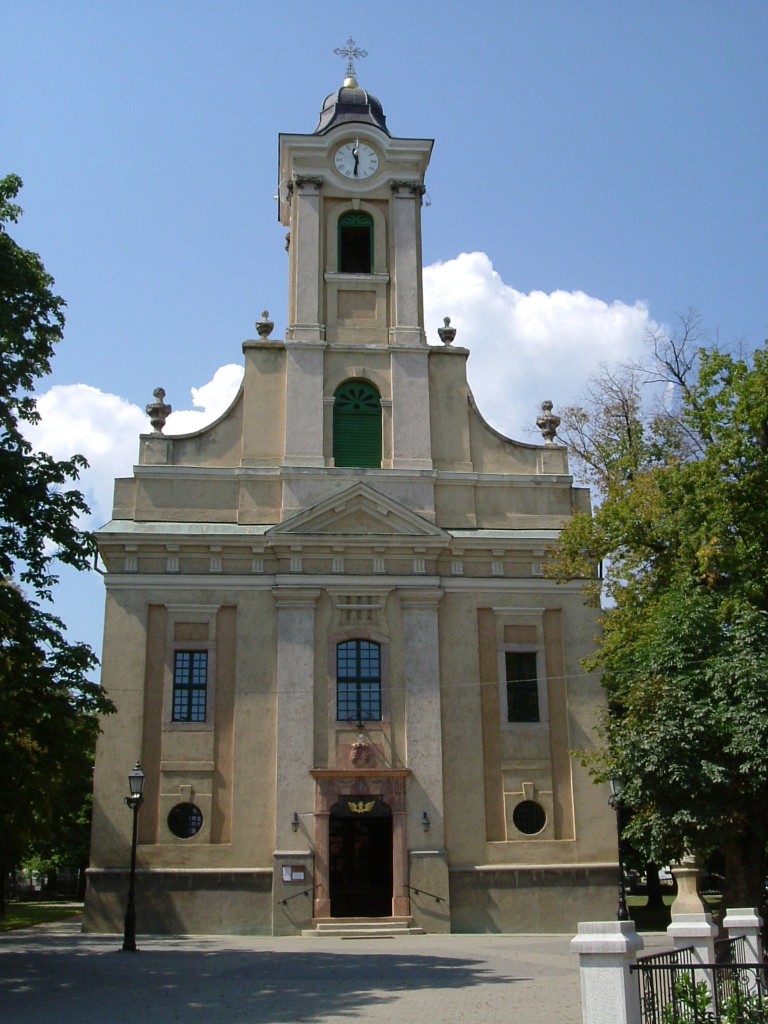 There aren’t many compensations to getting up at 6am every weekday to edit a Hungarian business newsletter, but here’s one of them. Sunrise over Piliscsaba … 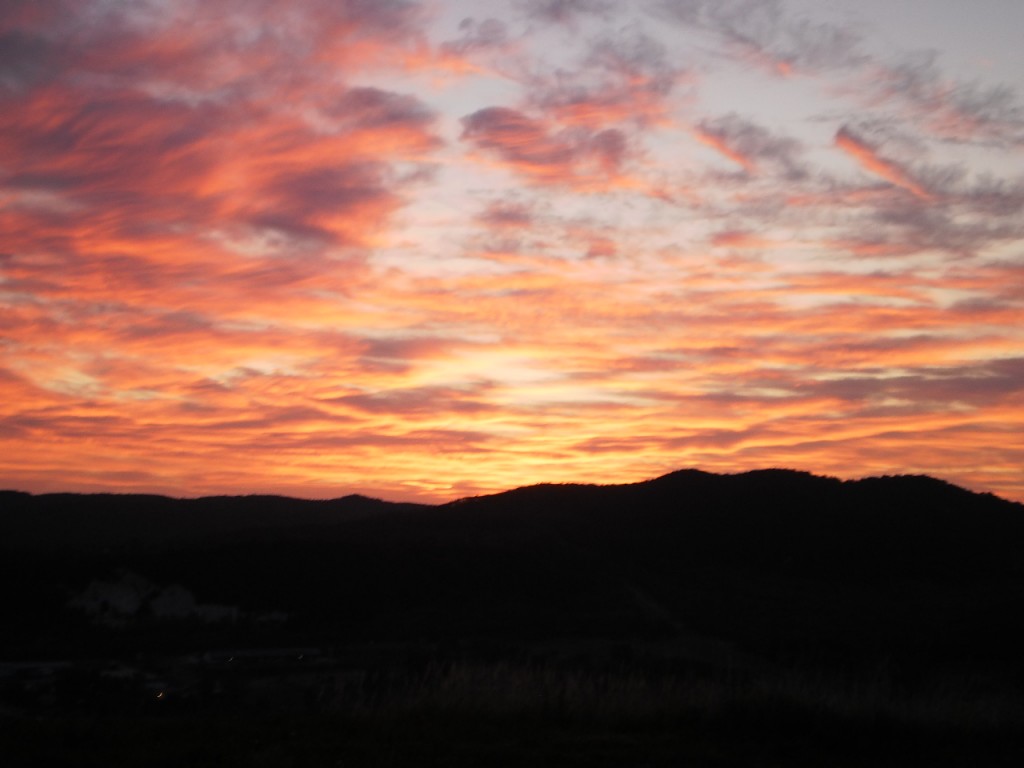 Mum and Dad and my younger brother Niall were over with us last weekend to see the kids – baby Esther for the first time – and celebrate my Mum’s 75th birthday. Hungary did them proud with blazing sunshine and cool dry breezes, just missing the ensuing heatwave.
While they were there, we finally got to see inside the village church in Piliscsaba, which dates from the late 18th century but is currently shut up for restoration, courtesy of EU funding, and only occasionally opens its doors. Luckily, the weekend was St Stephen’s Day, the national foundation day, and so the church door was unlocked, although the iron gate inside was still shut when we went in. All the same, we saw the interior, much of it – at least around the altar – now fully restored. 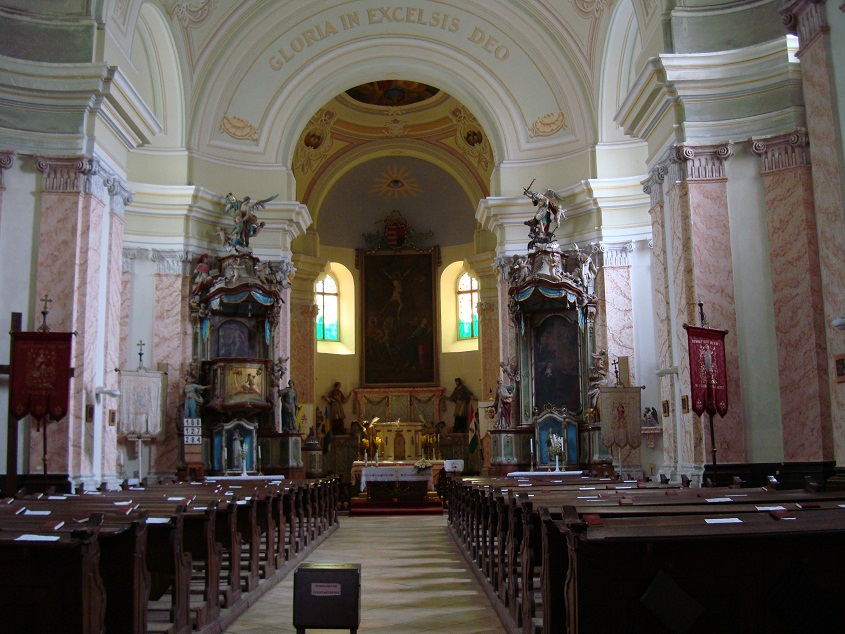 We also visited Esztergom a couple of mornings later to see the celebrated Basilica, Hungary’s tallest building and the world’s 18th biggest church. That did not make such a good impression. Unlike the beautiful Ancien Regime church in Piliscsaba, it’s an overbearing neoclassical giant, recalling the more gargantuan excesses of Schinkel. Something about its proportions really misses elegance or grandeur, and inside it feels chilly and overlit, miles away from the ‘deep and dazzling darkness’ of St Anne’s Church in Budapest, cultish without being spiritual, marmoreal without being dignified. It left me cold. 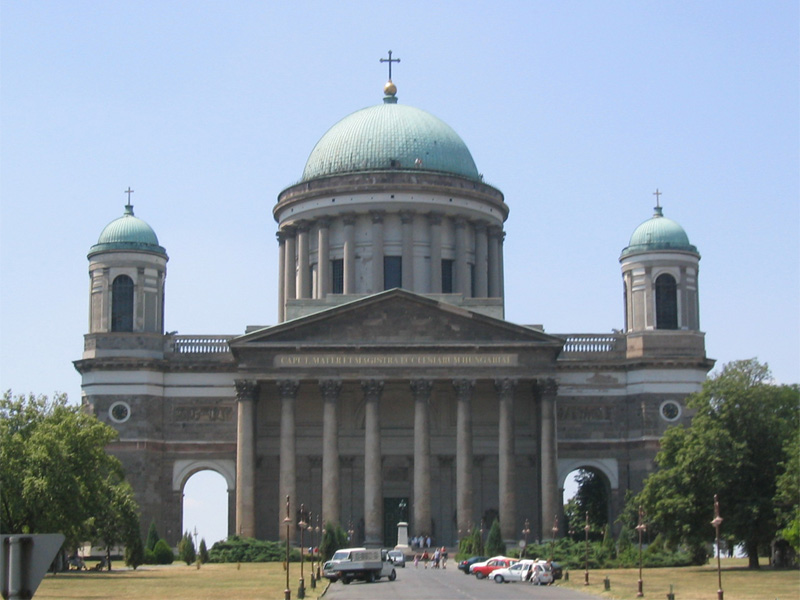 That’s a pity after the glowing description of it in the 1930s that Patrick Leigh Fermor begins Between the Woods and the Water with, but I guess he was lucky to see it filled with all the flamboyant pageantry of Easter.

Last Friday night I was in my bedroom with Lilla and Diana, lights turned out, while Esther slept in the other bedroom at the far end of the house. I looked out the bedroom window, which faces roughly north-west, between the half-closed curtains, and suddenly saw a bright greenish ball of light, like a marine distress flare, flash across the sky from the east behind the house, towards central Piliscsaba, and disappear over the hill. There may have been a starburst mid-flight with other pieces falling away, but I wouldn’t trust my memory on this. My first thought was that some neighbours were partying on Friday night and letting off fireworks, but there was no bang after the flash, and no more lights afterwards. Lilla was in bed with Diana and didn’t see the light, but she realized something was up and asked me to run through to the other room to watch over Esther.
That was all for the evening, but it turned out I wasn’t the only one who had seen something. Reports from all over Hungary, Slovakia and the Czech Republic next morning showed that dozens of eye-witnesses had seen the same greenish light in the sky, with security cameras and amateur astronomers picking it up as well. Consensus is that it was a large meteor, probably football-sized, that exploded in midair somewhere over the region, at around 30km above the earth’s surface. No one has found a crater yet, but tiny fragments probably reached the earth.
I’ve seen shooting stars before, but this was my first time to see a true meteorite – a bolide that actually reached the surface of the earth. And if I hadn’t been in the bedroom and looking out between the curtains just at that moment, I would have missed it.
You can see stills and videos of the flash here and at the links above.

After a long afternoon in Budapest’s Varosliget park, we wound up almost by chance at Vajdahunyad Castle, where we had our wedding party four years ago. Diana was only there in the womb back then, and Esther wasn’t even a twinkle in the eye. This time, Diana romped and played like crazy with other children at the lakeside cafe. The place is just as magical now – even more, if anything.

The weird Portakabin in the middle of the lake is a real toilet – a sculptural installation of some kind. How’s that for added romance? 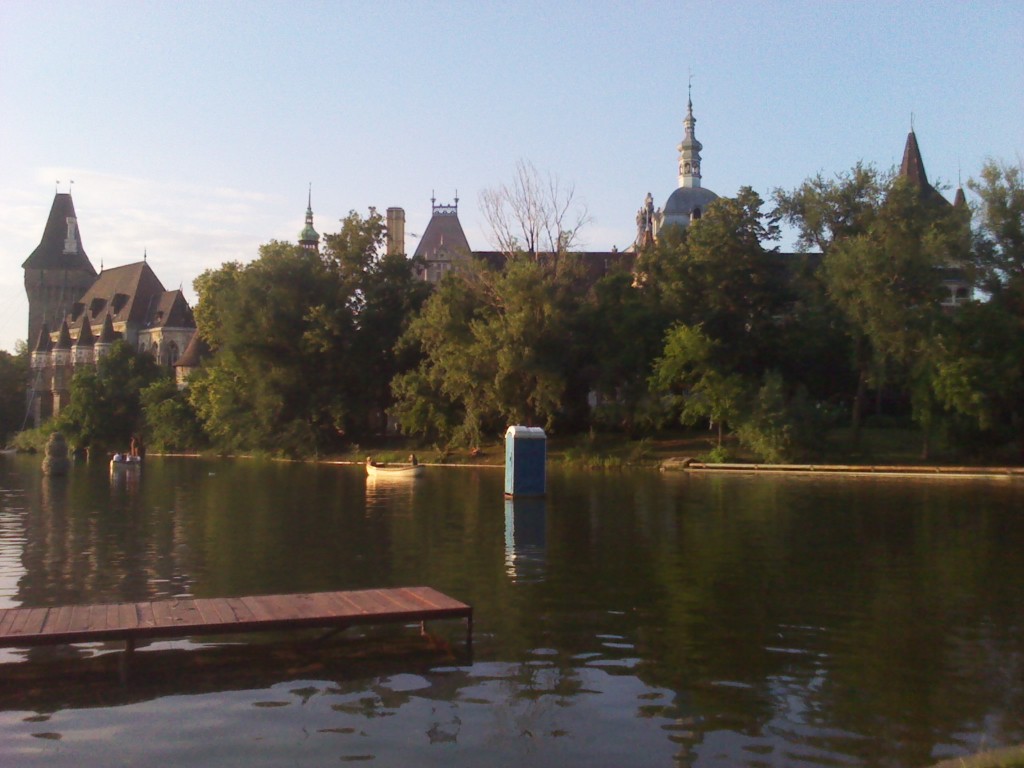 This is how the empty building plots at the end of our lane look in the morning: a carpet of cornflowers. And by the afternoon, they’re all closed again. 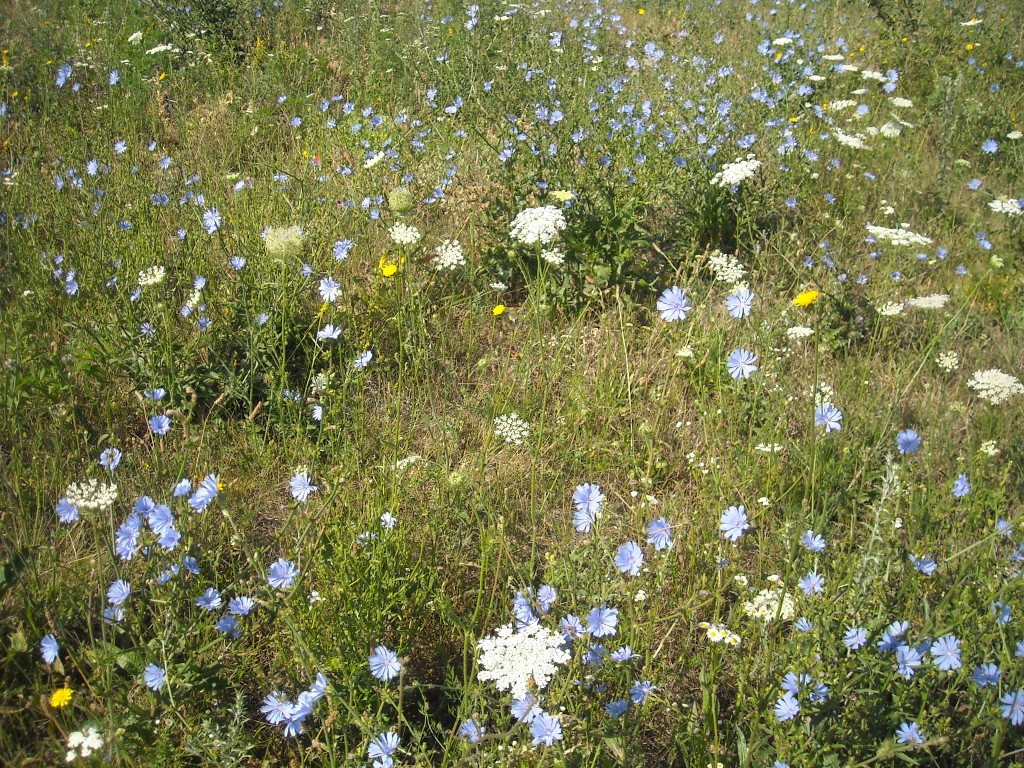 Apparently, the cornflower is not only France’s equivalent to the poppy in England, and the national flower of old Prussia, but is also the symbol of pan-Germanist ideas and Austria’s Freedom Party. No floral politics here! 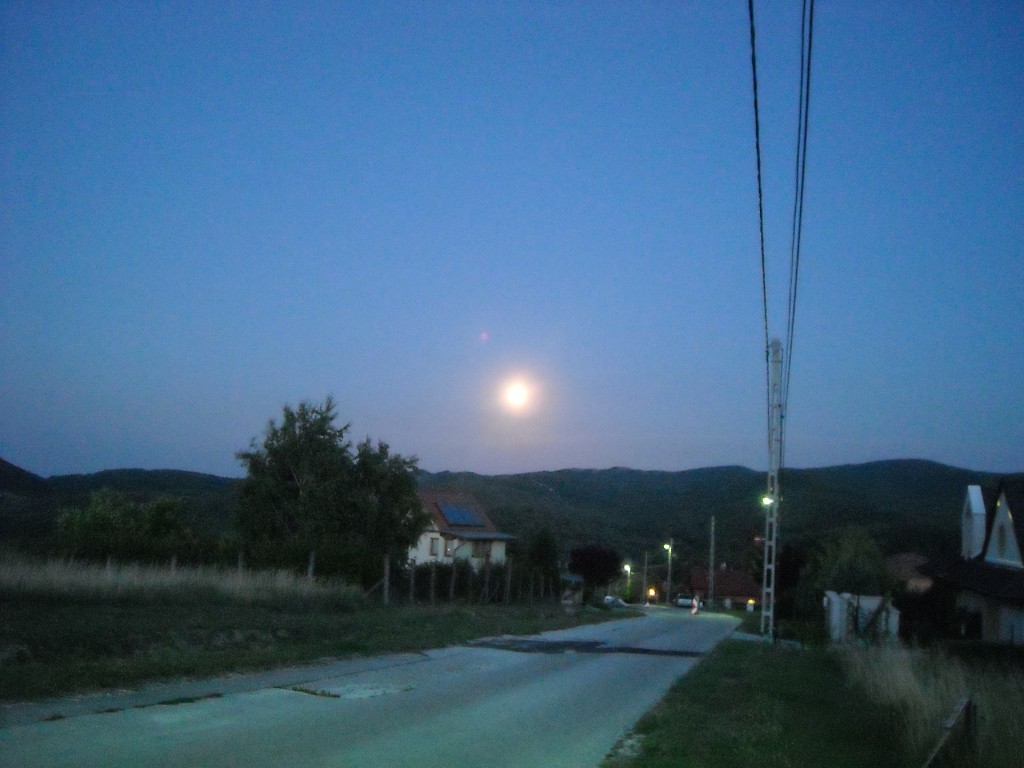 Courtesy of our good friend Csziszi, the saxophonist of Tátrai Band, I just took a drive west of Piliscsaba to the little wine village of Kesztölc, nestling under the eaves of the Pilis Hills. Its lanes are lined with huddled plaster cottages, and every so often, wine caves, entrances to cellars, windowless or with narrow loopholes either side of their low arched doors, ivy or vines crawling over their stonework.

The whole village is devoted to wine. Grapes grow in the roadside verges, beside the ditches and flowers. Small restaurants and wine shops, their gardens shaded by trellises, are everywhere. All the greenery gives the village a feeling of freshness even under the full glare of the Hungarian sun on a summer afternoon. And above are the bare chalky flanks of the Pilis Hills, whose limey soil nurtures the grapes and gives the local wines their flavour. 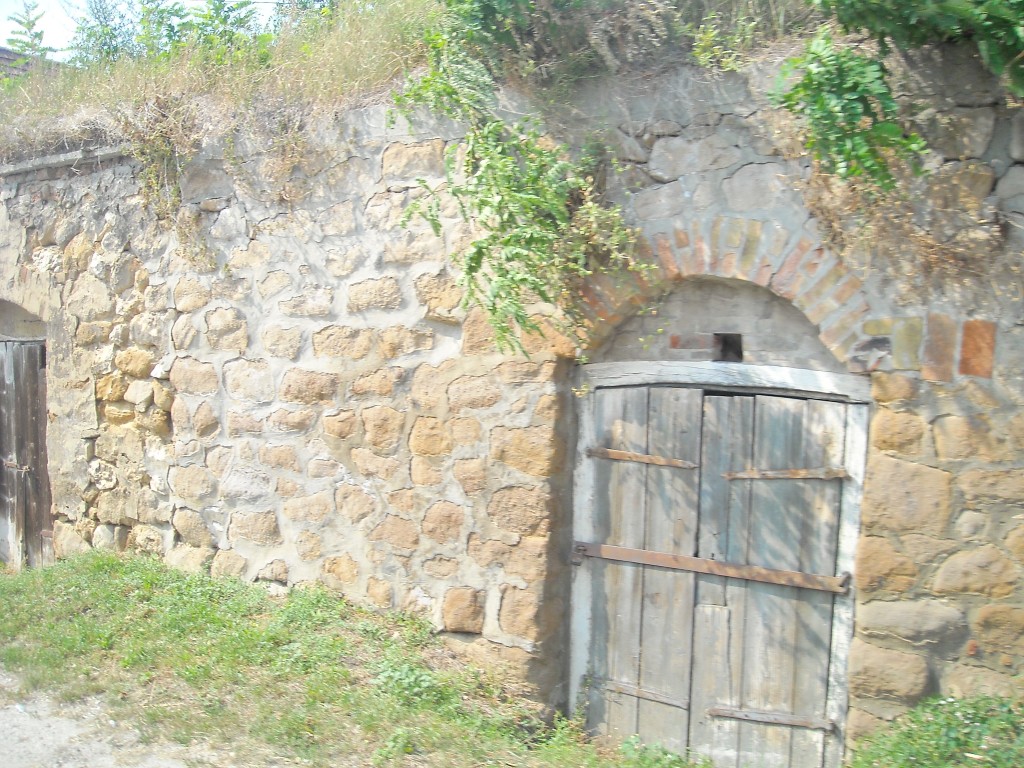 It was a beautiful afternoon. The sun was shining, the breeze was fresh, Diana was asleep on the front seat between us. Heaven. I came home buzzed with far more than just sunshine and wine.