The Arrival of Autumn

Red gates open in the hills,
gold gates bound in bronze and copper
on oiled hinges, massive valves
knobbed with bosses of ripe apples;
the sighing handmaidens of wind
strewing the processional route
with quilted gilt arras of leaves.

Reaper in the Garden

Tasked to garner the cut grass,
I take down the blunt rusty scythe
hung behind the drain on the back wall
and, wetted by pear beer,
whistling over stony ground,
I toil under the sweltering sun,
the bearded chine a stork skull’s beak
mounted on a coarse-grained snath
lopping barbed false barley ears
and purple clover heads dried to dark blue;
like Oppy at Trinity,
‘I am become Death, the destroyer of worlds.’
The mown mow stacked against the fence,
I flag, salute a passing magpie;
Laura the collie rolls in the hay;
Death withdraws into the clouds,
pleased I shared his attributes for a while.
I close the black note book, pocket my pen;
caught you: reading over my shoulder. 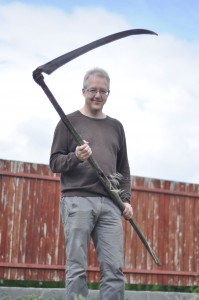 Seeing the showers start outside
in this unseasonable cold spell,
on the way out I grabbed my Barbour
– relic of my pretentious teens –
and hurried bare-headed through the rain;
the durable waterproofed waxed cloth
shedding water like off a duck’s back,
still unchanged, while I have changed so much
through heartbreak, childbirth, severance, divorce:
a good coat stays with you through the years.

My first collection, The Golden Age, is out again on Kindle after 15 years languishing in limbo!

White ships on the skyline
out beyond the islands
and the beach’s crescent
lie at anchor between
dovetailed bays and headlands,
shown by the bus’s ascent
drawing back the curtain
of the crumpled uplands,
ready and expectant
to voyage to the pure land
over the horizon. 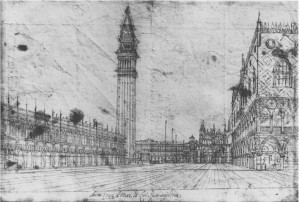 From Canaletto’s sketchbook, a
perspective view in black and white
of the Piazzetta, shows
the bare bones of those famous oils,
a wireframe scaffolding to hang
luxurious canvas on, across
the walls of chilly stately homes,
anatomizing all that pomp
drying on stretchers overseas.
The camera obscura trace
reveals the working methods of
the celebrated scene painter
who looked beneath the flimsy myth
to the hidden vanishing point
between the Doge’s Palace and
the Marciana Library,
still the same basic fabric as
Byron and Casanova saw,
stripped bleak as a De Chirico,
the flocks of culture vultures flown.
If the Serene Republic proved
so ephemeral, then what price all
those hordes of tourists passing through
the drawing room of Europe? There
for a brief whiff of their own demise
in that gorgeous catafalque
sheltering relics strewn across
the marshy Adriatic shore,
shored up by piles sunk in the mud.

Tattered banners snapping in the breeze,
riddled and torn, shot through by musketry,
blackened and dyed with blood and powder smoke:
abandoned standards, flagging gonfalons,
pennons and streamers, sacred oriflammes
of death, their quarters flayed, fraying in strips,
unpicked into the wind and ravelling
in ripples, bunting beating from lost waifs,
borne aloft on poles before the hordes
criss-crossing Europe, cantons pocked by hurts,
vexed vexillology of frenzy past,
save our eagles, flown on stricken fields;
now threadbare honours, drooping at half-mast
in martial chapels, dipped in cobweb shrouds,
the faded shades of former colours, hung
over the skeleton armies of the dead.